skip to main | skip to sidebar

In case you missed the last post, Beatdom has once again moved... We're no longer using this blog (except to remind you not to read this blog...) as we've now moved to a much nicer Wordpress blog: http://beatdommag.wordpress.com/
I know a few people still swing by here from time to time (it's more search engine friendly than www.beatdom.com) so I want to post a little reminder.
Beatdom is currently looking for interns. The interns will help put together Beatdom #7 and receive education in the field of editing, graphic design and writing.
For more info, please visit either the website or the blog.
Posted by DSW at 00:52 7 comments:

Beatdom's true home has always been www.beatdom.com. That's where you'll find the best information, and links to all of our issues. If you want to contact us, learn about us, or read our magazine, go there.
But this blog has always been a secondary source - a search engine-friendly and easily updated blog.
However, it has run its course. Blogger is nowhere near as advanced as WordPress, and Beatdom is moving over to the darkside. We believe we will be able to provide our readers with a better looking, more detailed blog by moving to WordPress.
If you own a website or blog, please update your links to include the new Beatdom blog. We'll keep updating this one for a few more months, before eventually switching over and shutting this place down.
From now on, you'll find us at: https://beatdommag.wordpress.com/
Posted by DSW at 00:47 No comments:

Letter from the Editor 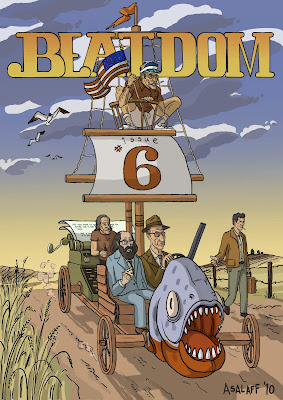 The idea for Beatdom’s travel themed sixth issue first appeared about a year ago. I had been travelling a lot and trying my hand at travel writing. Everywhere I went I read a few travel guides first, and everywhere I went I found the place was completely unexpected. The guides may have had all the right names, times and prices, but they didn’t have the soul of the place. Even the photos often failed to capture what a destination was actually like.

But every now and then I’d go somewhere and it would feel familiar. I went to Big Sur and remember passages of Kerouac’s classic, and San Francisco I found myself recalling the great poets and musicians who’d described it.

It occurred to me that the best kind of travel writing doesn’t concern itself with facts and figures. It comes from the experiences and spirit of travel. The best travel writers tell you what they felt, and I believe that gives a far greater pictures of a location than any traditional approach that you might find in a Lonely Planet Guide, or in a pamphlet you pick up at the airport.

I began thinking about starting a travel magazine, featuring only the best travel writing. I wanted my writers to take their inspiration from Kerouac and Whitman and to write from the heart. The magazine was going to be called Beatdom Travel.

After a while I realized a single issue of Beatdom could achieve the same goal. Perhaps it could even take subjects like music and war and politics and do the same. That way, the readers and writers of Beatdom could explore the world around together, and contemplate its significance in relation to the Beat Generation.

And so we have this, the first themed issue of Beatdom. Inside you’ll find articles about travel in the modern world, and in the world of the Beats. You’ll find essays about their influences and the influence they’ve had upon the world.

After this, we’ll tackle the subject of music in Beatdom #7, and continue taking subjects and exploring them through a Beat vision.

Issue Six is not just a travel issue. We are incredibly honoured to present to the world an essay about Alene Lee, written by her daughter, Christina Diamente. Christina read Steven O’Sullivan’s essay about her mother in Issue Four and felt the Beatdom was the right publication to finally reveal the truth about the woman most know as Mardou Fox from Jack Kerouac’s The Subterraneans.

Christina has also collected some examples of her mother’s unpublished writings, and has written short explanations of each one. But perhaps of greatest interest to Beat readers is “Sisters,” a short memoir written by Alene Lee, whose writing has never before been published.

As always we’re proud to present a piece of frantic prose by our art director Edaurdo Jones, and poetry by one of the world’s finest living poets, Kyle Chase. Both these authors have books pending release by City of Recovery Press.

Yours on the road

A few years ago Beatdom tried to help save Charles Bukowski's old bungalow from destruction. Now we're eager to help immortalise the low-life bard by having his image grace a US postal stamp.
There's a Facebook group and a petition.
Let's keep Bukowski in the public consciousness.
Posted by DSW at 21:22 No comments:

On the 5th Anniversary of the Death of Hunter S. Thompson...

On February 20, 2005, Hunter S. Thompson shot himself and ended thirty-five years of Gonzo journalism. There never was another Gonzo journalist and there never will be. It was a one man genre. And likewise, there will never be another HST. He was utterly unique. In fact, “unique” is perhaps too weak a word… He was a freak, an atavistic freak.

His literary influences were numerous, yet he was always an original. Thompson grew up worshipping Fitzgerald and Hemingway, and yet ended up being something totally different – Gonzo. He lived in weird times, and his style of writing develop in response to his surroundings – living through the 1950s, 60s & 70s; a turbulent era to say the least.

Most people know him from his work over only a short period of time. The development and maturation of Gonzo, from “The Kentucky Derby is Decadent and Depraved” to Fear and Loathing on the Campaign Trail ’72. Yet to fully respect the man one must look back further, beyond HST as a drug-fiend, to HST as a dedicated, scrupulous journalist. Prior to his Hell’s Angels fame, Thompson worked as hard as anyone in the game, and while that effort appeared later, it never fully reappeared.

Fame changed Hunter S. Thompson. Drugs changed him, too. Some say he created a caricature and felt compelled to live up to it… and that he became trapped in himself. Reading The Proud Highway drives home just how different Thompson was in his later years. He was not perfect. He came to feel later in life that he’d never reached his potential, and that his work was not respected as serious literary work.

So on this anniversary of his death, let’s celebrate his life and work not by wearing bright shirts, floppy hats and cigarette holders, or by getting messed up and speaking like Johnny Depp… Let’s remember Hunter S. Thompson as a serious writer; an important journalist who earned his place in history through hard work and devotion to the truth.

From the Desk of Edaurdo Jones... 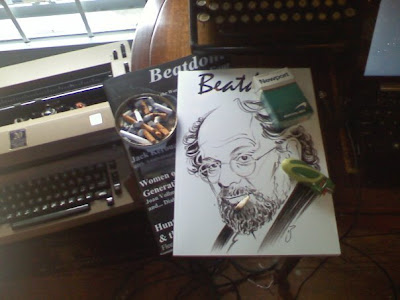 Thanks to our Art Director, Mr. Edaurdo Jones, for this photo... If anyone else has a photo of Beatdom at their cluttered desk, I'd love to see it.
Posted by DSW at 00:19 No comments:

DSW
This is one of the homes of Beatdom magazine, the best Beat Generation themed magazine on Earth!